Everyone I meet says this city used to be better.

They lament the loss of “Bombay,” the former name of this city of 18 million. They criticize the real estate development, the pollution, the politics, the steady ethnic cleansing of Muslims and other minorities. In fact, I have yet to meet a native who thinks the city is improving, or even that it may be a better place someday.

This grumpiness is common in leading cities, but it's surprising coming even from the rich and powerful. The city's many charms often go overlooked.

No doubt Mumbai has a mixed reputation. When I told my friends that I was moving to India I could see a shadow come across their faces as they tried to decide if I faced a good fate or a bad one. 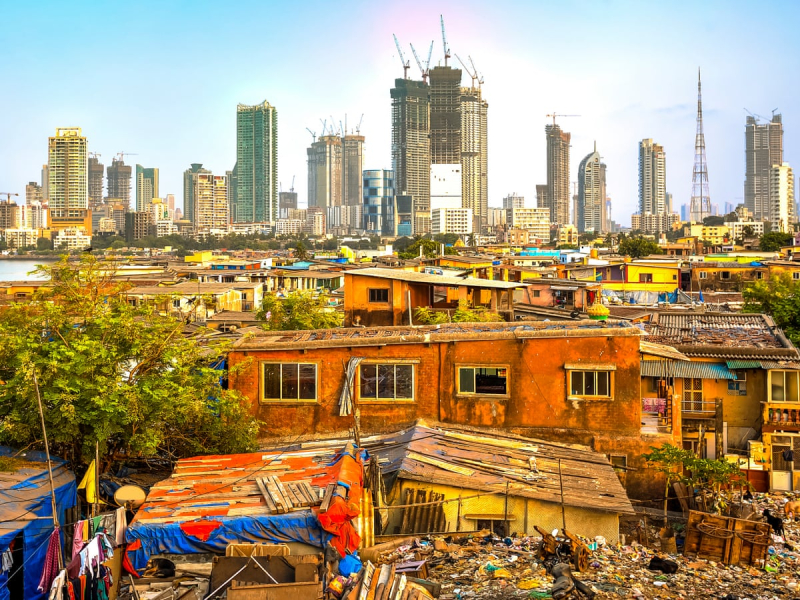 Since arriving at the beginning of August 2019, my family and I have been getting situated in work and school, figuring out daily tasks like where to buy vegetables and where I can get a cheap buzz cut. As lovers of cities, we try to absorb as much as possible. On weekends we often pick a neighborhood and then go there, with some shop, gallery, or coffee shop as the tentative destination.

• The mix of people is astounding, despite the political currents nationwide and in Maharashtra specifically. Walking the streets around Mani Bhavan it’s easy to imagine how bucolic the Gamdevi area must have been when it was an elite enclave. Today the symbol of embattled Gandhian secularism is adjacent to the Parsi area of Kemps Corner and the devotees visiting Babulnath temple.

• It’s an architectural madhouse, with Victorian era structures whose faded walls hold untold stories, to the breeze-kissed art deco around Churchgate, to the under-appreciated Charles Correa structures and urban plans. The city isn’t pretty — my apartment looks across a dead river and shanties, at an oil refinery flame burning 24x7 — but the scale is energizing.

• On the one hand, the sheer size of population is depressing in the context of the global climate crisis. But it’s fascinating if you try to imagine what’s happening inside all those brains. I’m influenced by the Kate Boo's Behind the Beautiful Forevers, but it stands to reason that each person is an individual with thoughts and dreams and disappointments. A recent newspaper headline (“From Garibi Hatav Nagar to Garib Nagar”) laments how one slum formerly known literally as “Poverty Elimination Town” still lacks reliable water and sufficient toilets after a generation and is now just called “Poverty Town.” The day-to-day resilience of the millions of residents at the bottom of the economic ladder is inspiring.

• Democracy, though flawed, remains vibrant. Bookstores feature shelves groaning with titles criticizing Modi and India’s political, cultural, and economic trends. The news media may self-censor and the quality often leaves room for improvement. Compared to living in a one-party state in Southeast Asia, this feels like full freedom.

• The industrial heritage is an enduring puzzle. There are dozens of mills — some turned into residential towers, but many just fallow gaps in the city. These properties could be repurposed into a combination of business incubators, art spaces, community centers, housing, urban farms, and parks. In his book City Adrift, Naresh Fernandes criticizes how they instead have been turned into overpriced gated communities with no thought to the reset of the city. I’m looking for a writer who remains optimistic.

• Despite the sprawl and traffic-inducing projects like the Sea Link, Mumbai’s seaside setting gives it a natural rhythm. The best parts of Suketu Mehta’s Maximum City talk about how the metropolis awaits rain each spring and greets the falling air pressure and first drops with a collective, relieved sigh. During the monsoon season the sky was often a brilliant blue; while flooding could be tragic, the downpours provided a sort of fresh start.

After two months, my question is who is trying to make Mumbai better? This city isn’t Dubai or Singapore, though plenty of people seem to wish it could be – if only the ruffians from the countryside could be kept in check. It’s common to hear self-congratulation that it’s a “cosmopolitan” city without seriously defining or qualifying the term. Lack of political self-determination is a major hurdle.

Of course, this sort of confused identity isn’t unique. For example, Mexico City fancies itself the capital of Latin America and has plenty of art and luxury shopping, but struggles with corruption and fails to provide basic services to millions of its citizens. In Seattle, my hometown, residents rhapsodize about the stunning natural setting but, even with an abundance of resources, can’t seem to make policy decisions that would turn it into a model of sustainability.

The opportunity to live in Mumbai is a gift. I’m no Pollyanna, but I’m eager to embrace the daily challenges for the chance to observe how the city changes (and how my view of it evolves) over the next few years. I look forward to meeting residents who are determined to help shape it.

The forgotten plan behind modern Hanoi

Hanoi is well known for its blend of French influence and Vietnamese character. One reason is a little-known architect whose plan helped shape the modern city where I lived for a couple years from 2017 to 2019.

Ernest Hébrard, who cut his teeth with designs in Greece and Morocco, created a plan in 1926 that organized colonial Hanoi into separate areas for industry, residences, and government buildings — the areas now known as the Old Quarter and French Quarter. Gardens and sports facilities would stretch north around Hồ Tây, the urban lake which was at the time still surrounded by agriculture and small settlements.

The plan, while never fully realized, is one of many that shaped the 1,000-year-old city. Subsequent influences include Soviet-style urban planning, the austerity period following the war with the United States, and the commercial boom starting in the 1990s that put economic growth well ahead of historic preservation or design considerations. When the French took control of the area in the 1880s, Hanoi was a dingy river town with faded imperial glory. The colonizers filled canals, drained swamps, and built roads. To demonstrate their power, they tore down the walls and symbolic buildings in the 11th century imperial Citadel, and put a cathedral on the spot of an important temple.

The new colonial city they built was for the French residents and a small number of Vietnamese elites. Anyone who stood in the way was sent to the Hỏa Lò prison, which first opened in 1886 and would one day be dubbed the "Hanoi Hilton" by U.S. POWs. Eventually, along with global trends, the colonial government wanted to demonstrate a gentler form of mastery, which could win the “hearts and minds” of the locals — at least the elite ones. They called on Hébrard, an architect who was known in colonial circles for city plans in Morocco and Greece. (There’s maddeningly little information about Hébrard today. William Logan’s out-of-print Hanoi: Biography of a City is the most comprehensive source.)

By the time Hébrard arrived in Indochina in 1921, colonial administrators had Paris in mind for their colonial capital, as well as competion with ongoing development in British and Dutch colonies. Like the planners who upended medieval Paris to lay down modern boulevards, they believed that building a new grand metropolis would be worth the sacrifice of current residents. They weren’t concerned about local unemployment or poverty or social problems like prostitution, which festered out of sight and fueled the growing independence movement. Improving the city was in part a way to counter labor strikes and other civil disobedience against the colonial rulers. At the time Hanoi had about 100,000 inhabitants, including around 3,000 Europeans. (Cited in www.Hanoivietnam.fr.)

Hébrard’s plan is considered groundbreaking because it blended economics, statistics, hygiene and management. Grand new government buildings would be situated in an area specifically set aside for that purpose. Instead of mixing workshops and small-scale factories amid housing, industry would be in its own zone. Radiating streets and parks would civilize the place. A single large park would extend from the city north to Quảng Bá peninsula — today’s expat-friendly Tay Ho or "West Lake" area. (See Hanoi, a Metropolis in the Making, ed. by Sylvie Fanchette, 2016. For the Hebrard plan, see Nguyen Thi Hoang Lien, in VNU Journal of Science, 2014) 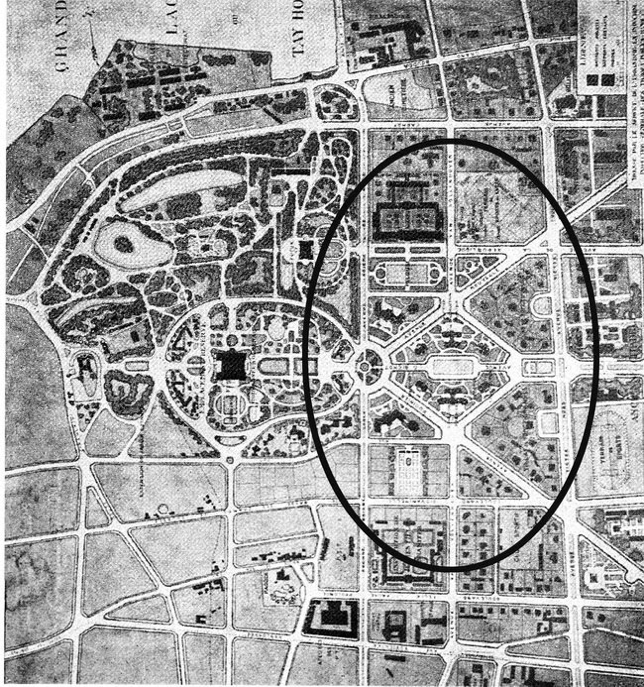 Section of Hébrard’s plan where Ba Đình Square is today

For buildings, Hébrard eschewed the prevailing French use of Gothic design — with heavy shapes decorated by ornate gargoyles — that was popular across the colonies. His designs instead incorporated art deco along with ventilation and canopies designed for Vietnam’s climate, a style known as Indochine. Several examples of the buildings still can be seen today: the Ministry of Foreign Affairs building, Cua Bac church, the Museum of Vietnamese History, and Hanoi Science University.

Modern critics fault Hébrard for segregating Europeans and locals, consistent with colonial attitudes of the time. He apparently ignored the outskirts of the city and showed no interest in housing for the vast majority of Vietnamese. He didn’t widely promote or explain his ideas so the Indochine style, while eclectic, didn’t develop into an indigenous form that would be adopted broadly. Unlike today, there was no idea to engage stakeholders in the planning process.

Ultimately the colonial governors of the 1920s weren’t dictatorial enough to force Hébrard’s plan through. Budget issues plagued development and then the Great Depression hit. Hébrard left Vietnam in 1929 — within months of the formation of the Communist Party in Hanoi. The radial street grid was partially adopted by subsequent planners, even if it was mostly overtaken by internationalist-style buildings and Soviet-inspired blocks. The Tay Ho neighborhood was left as an untouched agricultural afterthought that gradually developed into today’s popular urban village.

I would love to find a copy of the Hébrard plan or other related works, which are probably lurking in a used bookstore in Southeast Asia or Europe. I'm adding it to my treasure-hunt list.

(I orginally published a version of this essay in May 2019 as part of a community history project called Old Tay Ho.)